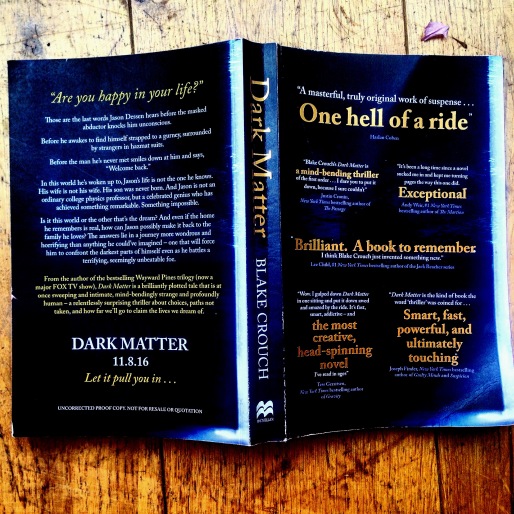 A genius work of speculative suspense fiction, a thrilling love story, an intimate action adventure from the author of Wayward Pines

Have you ever wondered: ‘what if?’

As in, what if you ate the apple instead of the cake? What if you never went to that pub that night? What if you’d left the house five minutes earlier today?

Well what if every time you made these tiny decisions to do x instead of y, in another possible world you did do y instead of x. You did choose the apple instead of the cake. You did skip out on the pub. You did leave five minutes ahead of time.

In such possible worlds, your different decision – innocuous on the surface – causes a ripple effect in terms of what then follows. By eating the apple, you stave off guilt so you don’t go to the gym. By not going to the pub you don’t meet that stranger with the crooked smile. By leaving earlier, you’re part of the car wreck rather than an observer of it.

The world in which you eat the apple and the world in which you eat the cake are pretty close together but from the point those worlds diverge, they become further and further apart. By eating the apple and not going to the gym, you then do go to a bar where you see your friends and you have a conversation which leads to a plan which leads to a flight which leads… and so on. But in the real world where you ate the cake, you did go to the gym and none of the rest happens.

In history and philosophy (and psychology and a bunch of other social sciences), this is referred to as counterfactual theory or counterfactual thinking – the idea that you can imagine something else happening and things turning out differently. In reality these occurrences could never have happened (because something else did) but we can still entertain the thought.

Spinning a tale around a ‘what if’ is not unusual in literature – think Phillip Roth and The Plot Against America, Alan Moore and Watchmen, or The Man in the High Castle by Philip K Dick (and now an Amazon TV show). But what Blake Crouch does in Dark Matter is something else entirely.

When I received Dark Matter from Macmillan I was intrigued. Blake Crouch is not a writer I had come across before (a cursory Google shows he’s the author of mega-popular trilogy, Wayward Pines, as well as around a dozen more novels and a few screenplays) yet here was a new, standalone thriller with rave reviews from everyone from Tess Gerritsen, of Rizzoli & Isles fame, to Lee Child, author of the bestselling Jack Reacher series.

I was sceptical (as I often am). With so many plaudits, how could this book be anywhere near as brilliant and masterful as it was being built up to be? Yet from about half a chapter in I knew I was going to have to eat my incredulity.

The novel is unusual. It’s an action-thriller with a Bourne-esq abduction kick-starting a tightly plotted narrative. At the same time it’s a love story – not a romance but a real love story – around which the rest of the plot swirls. The central relationship (perhaps better described as a partnership) is the eye of the widening gyre. This lays the foundation for a gorgeous, profound story about a match of equals in a possible world where the protagonist – a university physicist called Jason Dessen – never wonders ‘what if’ about his life. He knows he has everything he needs. Blending love into the thriller mix, however, gives Crouch all the ammunition he needs to tell a high-stakes adventure with an all-too-human story at its apex.

And then just when you think you’ve found Vanilla Sky 2.0, Crouch adds in quantum mechanics.

And everything you ever thought comes down to that question: what if?

‘What if’ haunts the novel. It’s the question that defamiliarises everything around the central characters, their lives, their futures. The result is a dark, uncanny testament to Crouch’s skilful ability to interfuse serious science with a non-stop thriller. He never shies away from a theory or a conundrum.

There are moments where certain concepts could teeter towards the absurd (towards the end in particular). Yet he manages those moments through his protagonist’s narrative voice in a masterful balance of farce and horror. Likewise there are instances where the science or philosophy risks being overwhelming, but again Crouch brings it back to Dessen’s internal voice and to the details that give a weighty theory some lightness of being.

It’s through these moments that the suspense ratchets upwards. As the whirligig of Dessen’s thoughts process physics and philosophy, concurrently we find ourselves processing the intimate questions of what it means to have free will, to make choices, to hold onto a sense of personal identity. Add a generous dollop of danger to make every decision on these subjects a matter of life, death or loss, and you have a profound but relentlessly ambitious book on your hands.

In this sense the novel is deeply psychological, acutely intelligent. It’s one where giving away spoilers to readers would be a crime because you need to experience it for yourself for the first time.

Without bloating or bogging down the story, Crouch’s novel is a ride with a thousand twists and turns, mirroring the myriad decisions that could transform our lives everyday. It is a book full of constant, page-gripping surprises. Fact is, as humans we have an amazing ability to believe that things need not have turned out the way they have. That things could have evolved in countless other directions. We apply this on a personal level (cake, pubs, travel), and a historical level (what if Napoleon won? what if the Kennedy assassination failed? what if Google rather than Facebook bought SnapChat?).

But Blake Crouch takes counterfactual theory, takes all the mind-blowingly complex ideas of great thinkers like Leibniz, Lewis and Langford, and then takes his readers on one of the most heart-pounding, brain-twisty journeys in literature.

So yes, some would call this a sci-fi novel, others a love story, others a straight up action thriller. But Dark Matter is genre-defying, genre-defining. Powerful, poignant: it is stunning though harrowing at times, absolutely one of the most creative and awe-inspiring books I’ve ever read.

Whilst it’s only May, Dark Matter by Blake Crounch is definitely in the running for my best read of 2016. Crouch’s meticulous plotting, pin-point prose and provocative characters will hook even the most sceptical readers – providing they’re willing to be challenged on every thing they think they know. As long as they’re willing try to answer: what if?

Dark Matter by Blake Crouch is out in the UK on 11th August 2016, and in the US on July 26th, published by Macmillan and Crown publishing respectively. Hardcover Retail Price TBC; Amazon Prime Pre-order Price Guarantee £12.99; Amazon Kindle £6.02