Time Magazine might have thought it popped up by surprise, but in reality Amazon’s first physical bookstore has been a long time coming.

To be exact, they’ve opened a 5,500-square-foot bookstore, carrying a not-that-impressive 5,000 to 6,000 titles with 15 employees under the direction of Amazon Books Vice President Jennifer Cast.

It’s also in Seattle (so most of us don’t have to worry too much just yet).

However, if you’ve paid any attention to the larger book world of late, you’ll realise those usually soft susurrations of discontent are more like a cacophony of squawk boxes (and far more rancorous).

Because bookstore owners loathe Amazon. Everyone knows that. They undercut the cost of books through ecommerce, drove more bricks-and-mortar shops out of business than can be counted, and upended the bookselling industry. That’s before they branched out into publishing, whereupon they pissed off the rest of the book industry as well.

With this in mind, it’s understandable why derision met Amazon’s announcement of Amazon Books.

Yes, you read that right as well. Amazon’s bookstore has the highly original name of Amazon Books.

Ahead of its launch, many received the rumours with incredulity and the press release with reported ‘horror’.

James Daunt, managing director of Waterstones told The Bookseller he hoped the venture would ‘fall flat on its face’:

“…With only 5,000 titles in a space in which Waterstones would put over 10 times that number, it appears to be a tentative dip of the toe into physical bookselling waters … Clearly, however, a skim of the bestsellers away from true bookshops would be very damaging: we very much hope that it falls flat on its face.”

Emma Corfield Walters from Bookish in Crickhowell concurred, admitting she’d be ‘horrified’ if such a store came to London.

Similarly, on launch day, many continued to poke holes in the viability of Amazon Books.

In one of the best reviews, Dustin Kurtz describes the store as ‘wildly banal’. According to him, compared to the awesome disruptive power Amazon had online, the only thing they’re challenging in the University Village Mall is the occasional ambling shopper en route to buy hammers. Kurtz also called the space physically odd and betraying inexperience with retail.

Amazon is placing all its books face-out (Source: Amazon via City A.M.)

But looking at the photos, if Amazon Books’ stacks are situated so close you have to brush your neighbor as you pass, our British shops must be built for Borrowers. High Wycombe’s Waterstones with its single-file walkways and lack of logical layout springs to mind. Also most second-hand stores with their topsy-turvy aesthetics.

There’s a small part of me that thinks that if the largest part of Kurtz’ anti-argument is the layout (which honestly wouldn’t be difficult to improve), then the store probably deserves at least a half point more on its 2.5 rating.

However, as we all know, making a fuss in the book industry is a pretty commonplace communications strategy.

Amazon will have anticipated negativity around its Seattle opening. If their CEO sneezes it makes the i100. Therefore it’s only sensible to conclude most of the commentators on the launch are either bookworms who love bookstores, bookworms who love cheap books, or book industry pundits who want to ensure their tuppence makes bank.

Jumping on a news story like this makes it interesting to a far broader reach. Yes it’s the online going offline but the story gained more column inches because of the e-retailer’s critics than it ever did with the press release. They helped it garner worldwide interest despite really being a small, local outpost.

Why would Amazon’s detractors want to help boost the story onto the international stage?

Because it gave them, amongst dozens of literary voices, a chance to associate their name and business with a current industry issue. It’s simple thought-leadership. It’s why so many opinions are biased because biased makes a good story. It’s why the majority focused on the irony of Amazon killing the bookstore only to open their own. Why Salon’s headline was ‘Amazon wants to be hated’. And why many rebuff Amazon Books for simply being an exercise in PR.

I suspect there’s more to the story than chasing away negative press. There’s this little inkling in my fingers as I type, telling me there are some pretty interesting pointers to take from the online monolith’s first official bricks-and-mortar bookshop.

For one, by basing the store around ‘data driven’ retail, Amazon is harnessing it’s online business model and taking a risk many traditional booksellers might not want to take. They’re testing the limits of omni-channel shopping, combining online and offline, the systems and skills that might work across industries. Likewise, the fact the store’s books are face-out, tagged with a review and rating from the site – it sounds like a crossover between an airport WH Smiths and old video rental stores like Blockbuster, but having all the books face-out recognises the way we browse online.

Plus, whilst there’s nostalgia in the browsing of books according to genre and taste, having a store that stocks books based on ‘customer ratings, pre-orders, sales, popularity on reader recommendation site Goodreads, and its curators’ has its own benefits. Namely it will stock the most popular books – as demanded by the reader – so not just those from big publishing houses. If it works, this could be good for self-published writers, independents and niche titles, holding the potential to curate books without the cliched sales line of ‘if you loved Gone Girl you’ll be gripped by this totally opposite novel’. Which would be kind of refreshing. 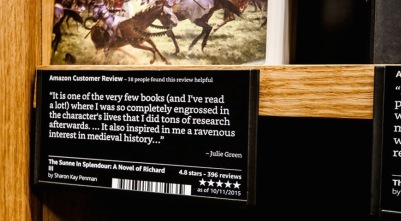 Of course, it could also work the other way, making books disappear if they fail to gain that 4.8 star rating. Which would be about as positive for new writers as a dead fish to the face.

But beyond the pros and cons of their algorithms, the biggest sign that Amazon Books is no mere vanity project is the statistics showing e-reader and e-book sales have slowed. The long-term love and passion readers have for the physical book is boundless.

In a plot twist literary scaremongers failed to predict, print is far from dead. The digital apocalypse never arrived. Kindles and Nooks happily cohabit with paperbacks.

As reported in the New York Times:

“E-book sales fell by 10 percent in the first five months of this year, according to the Association of American Publishers, which collects data from nearly 1,200 publishers. Digital books accounted last year for around 20 percent of the market, roughly the same as they did a few years ago.”

Seeing statistics like this, coupled with Amazon Books foray into physical retail, a far more positive light shines on the industry landscape. After all, what does it suggest if not the longevity of the physical book?

Amazon is often depicted as the antagonist in the book industry narrative. To survive, the best loved and most successful physical stores have focused on those curation skills bespoke to bookish hearts. And it’s working. Independent bookstores, battered by the recession and competition from Amazon, are showing strong signs of resurgence.

The reverse migration to print, the hybridisation of how readers read, the toe-dipping arrival of Amazon into offline spaces – all these things convey the continued love for stores and books and the power of those spaces where the two meet.

Now that’s something to dance about.