Different writers have different styles of writing. That’s a given. Starting from the very basics of narrative voice to the inspirations behind the story, what makes up a writer’s style is a question of influence, taste, and personal voice. It’s their literary fingerprint. It’s why even the best ghostwriters will always be slightly paler imitations of their author’s voice (regardless of how well the chameleon blends into the background, he’s still not part of it right?).

Yet one element that has always fascinated me but readers and aspiring writers don’t necessarily ever see is the writer’s style of creation.

Oh we’ve all heard about the peculiar ones, the quirky habits: the hoarding of postcards, the walls of notes, the lucky chair that squeaks, the writer who, like some method actor, cloisters himself away in order to experience the same crippling isolation as his protagonist. I’m not focusing there today.

I’m focusing on the stories and how they begin, where they come from, what makes a person pick up their pen and write. It’s the initial spark that I’m curious about and thought I’d discuss. 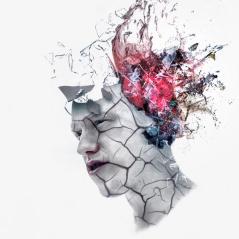 The human brain contains about 100 billion neurons. All together, those neurons contain about enough electrical energy to power a small lightbulb when you’re awake. In fact, our human brains are so fast that it takes the world’s most powerful super-computers 43minutes to process what we do in a second. So with a ton of information flooding the brain at any given moment, it’s no wonder it has to organise everything somehow nor that it does so in story form.

Stories are how we make sense of the world.

Implying all humans are innate storytellers, why then doesn’t everyone tell stories? Why don’t all humans fill up the hours by writing down their ideas? After all, doesn’t the saying go something like: ‘everyone has a story inside of them, waiting to be writ?’

For one, it’s a matter of interest – not everyone cares enough to write and others not enough to finish. More importantly, in this sense, writing isn’t about solipsism and the grand tangle of ganglion cells passing information neuron to neuron. Writing is an opening of one person to another person, a door from one mind to another.

Human language didn’t develop just so we could think in more complex ways, but so we could develop socially. Through ‘social development’ we learn about ‘self’ and ‘other’, and through understanding those things we develop stories because they help us comprehend the barriers, links and blended spaces between persons.

Ok, moving away from my degree in neuroscience, if not everyone has the interest or the determination to be storytellers in the commercial sense, then the writers that succeed, the ones that write and write and regardless of monetary achievement keep writing, must have something that triggers their ideas, that sparks them into action.

Talking to writers you’ll hear about all their different methods. One of the best writers I know (and who I mention frequently – check her and her writing partner out on Nerd Cactus) is a ‘world-builder’. More often than not her inner historian creates a ‘what if’ situation, a world that is transformed by a single decision, and then she comes up with characters to populate it, a theme that drives it, a plot that underpins each sequence of (often unfortunate) events.

My purpose as a writer is to loot my life to the very walls. THOMAS WOLFE #amwriting #writing pic.twitter.com/GPgv79kWO6

On the other hand, despite working really well together on literary projects (our best is Renegade Earth, the trilogy) I almost always come from a completely different angle. I start with a character. Often just one, who I ‘hear’ in my head. They become part of a scene. That scene develops. We have a discussion: what’s their story, who are they, why should I care. If they fall down in any of these areas, I then investigate whether there’s another person I can talk to instead. I build up from the people, figure out their world, then start on the actual plot and idea.

The way we work together might seem strange. We start in such completely different spaces at times. But it functions because where she can become bogged down in the background, I can pull it back to the people; where I can find myself stuck in one character’s head, she’ll drag me back to the story we’re telling. As part of our development as writers, we’ve learnt from each other and so whilst my ‘initial spark’ is a character and hers more a question, the process is beautifully balanced.

When I put the question to some of the folk on Writer Unboxed, the answers came back with similarly disparate ‘starting points’ for writers. For some it’s when ‘an image blows up’ in their mind – a scene, a moment, complete with words and concepts. For others its all about concepts – they see a thing, remember it; read something, discover a new angle to develop. Some might prefer working with a relationship or a situation.

Most of the writers I spoke to, however, also mentioned that it’s far from being ‘kissed on the ear’ by the muses.

Inspiration might fall into an empty mind, or one that’s so full the idea of fitting more in hurts.

It also can shift. Whilst characters might instigate eight out of ten ideas, later finding an interesting idea in a book of conspiracies or in someone else’s writing is hardly unusual. No two stories are completely the same and no two writers seem to have identical processes.

Seeing the world in different ways is crucial. So whilst we may all claim a coffee habit, or a need for a nicotine fix (this is actually neuroscientifically explicable due to the dopamine dependencies curated by writerly minds that also link to the deficit disorders, depression and creativity associated with them), how we create ideas or start stories is almost entirely distinct from story to story, person to person.

So yes, writers work in different ways and have unique starting points that are as individual to a writer as their literary voice. It also means that if you’re writing one way and your favourite writer works another – don’t panic. No one really works the same way.

Your artist antenna can be trusted even if it’s not receiving the same signal as everyone else. In fact, that’s probably the best news you can hear.

Next up – best places to write in London

3 thoughts on “Of Characters & Coffee (or what starts writers writing)”